During most of the 20th Century, most magicians were familiar with the promise of this box and its logo.  It could contain any of a variety of treats: a Svengali deck, marked cards, a stripper deck, a forcing pack, etc.   Indeed, at a time when a gaffed bicycle card was nearly (or even entirely) unheard of, Fox Lake produced almost every gimmicked deck available along with a wide range of packet tricks, like the famed Wild Card.


Where did these cards come from?  Here's some history from the Haines House of Cards website:


"Originally the Fox Lake Card Company started in the 1930s by John Snyder Jr. who had made arrangements with the US Playing Card Company to produce gaffed cards based on the Aviator Bridge Style cards they crafted. After serving in the U.S. Army during World War II, Ronald Haines worked for Snyder at the Fox Lake Card company. Ronald purchased the company after Snyder died in 1947 and renamed it Haines House of Cards, which he ran until his death for more then 30 years."

John Snyder maintained a summer home in Fox Lake, WI from whence he got the name for the decks.  After purchasing the company, Haines eventually acquired the exclusive rights to produce all of the mechanical decks designed by R.W. Hull as well as other card effects by Hen Fetch.  The Company's success continued for many decades. "The Haines House of Card ships thousands of Svengali, Stripper and Invisible Decks around the world," George Schindler wrote in 1976, "more than any other supplier."  As mentioned in the Washday Magic post, the firm also hosted meetings of the W.W. Durbin IBM Ring.

Given the ubiquity of these cards in the magic community, it is unsurprising that many performers had their throwing cards printed on Fox Lake stock. Unlike U.S. Playing Card Company's Bicycle imprint, Haines did not do the printing or offer cross-promotion, rather, it simply sold blank cards to performers.   In the late 1950s and early 1960s, several magic magazines featured effects by which a performer could transform a playing cards into a business card, urging magicians to print these card on pasteboards provided by this outfit.  "Haines House of Cards. . . can supply you with blank face cards for your ad message," John Braun wrote in The Linking Ring in 1960. 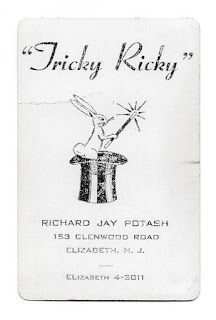 We have featured a several throwing cards printed on Aviator Bridge sized cards, all of which were presumably printed by Haines House of Cards.  These include "Tricky Ricky" Jay, Washday Magic, Topper Martyn, Tommy Windsor, Grdina, Alexander the Great and King Baile.  Others include Solmu Makela, Mr. Carpelan, Ulf Agdur, and Finn Aspen.

Perhaps most important, as a clue for collectors, a bridge sized throwing card with an Aviator back most likely dates to the 1950s through the 1970s.

Some throwing cards featuring Aviator Bridge backs are seen below: 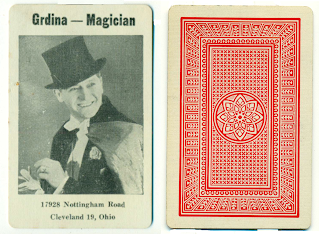 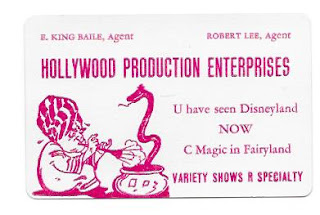 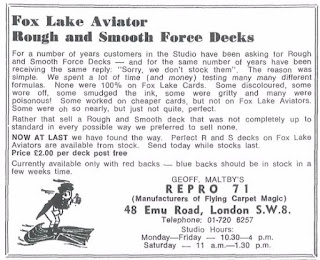 There's an interesting Magic Cafe discussion about the availability of Fox Lake cards to magicians and the popularity of Aviator-style cards among the general public.  In it, practitioners discuss some of the issues with the Fox Lake cards, such as color differences between those cards and the US Playing Card Company's Aviator decks, as well as some other handling issues.