Back Story - The Importance of Throwing Card Backs 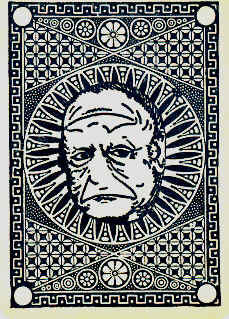 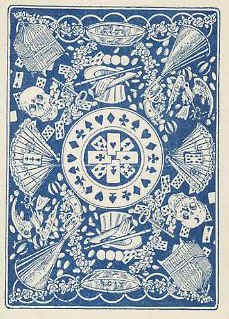 While the face of a scaling card generally is the highlight of any piece, the back often has a story to tell.  Given the costs involved in producing throwing cards, many magicians used standard or stock throwouts -- often blank cards which could be overprinted or cards offered by manufacturers which could be customized by the performer.   Other card backs carry advertisements for things like chewing gum, automobile tires, odd inventions, magic courses and, most notably, card designs showcased by playing card manufacturers.  Indeed, one common scaling card back was made by a copper engraving block sold to magicians to make do-it-yourself souvenirs.  The back designs, then, can help date a card and offer insight as to how it was prepared.   Such behind-the-scenes details can tell us much about the history of these items.


In June 1944, John Mulholland wrote an excellent article about throwing cards which appeared in The Sphinx.   Mulholland provided the following information about the production of playing cards with some important detail about back designs: 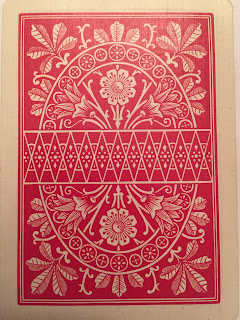 "For a number of years, in the early part of this century, the United States Playing Card Company, and other manufacturers of playing cards would print a quantity of cards gratis for any magician requesting them.  The cards playing card companies’ generosity to magicians to distribute cards bearing advertising of their products on one side of the cards. The Roucleres cards advertised “Pluto Water – American’s Physic”; Thurston at one time advertised “Miller Tires” for automobiles, and at another time announced “Thurston’s Perfect Breather” which was an 18K-Gold Filled devise which “stops snoring instantly.” Eugene Laurant’s cards recommended “Cracker Jack” and “Angelus Marshmallows”. Other magicians had cards advertising yeast, or cigarettes, or shoes, ships, and sealing wax, as well as their own great ability as magicians. The Tarbell Mail-Order Course in Magic supplied cards for many magicians at the time when the course was first published.

"Scores of magicians had cards made with a back design, “The Mahatma” magazine had
drawn. This design pictures a number of different pieces of magical apparatus. Beginning in 1913 many magicians began using the pattern engraved by Theodore L. DeLand for the “Deland Dollar Deck”. Still others used the two-way-smiling-frowning face design. A comparatively few magicians had special designs of their own made to ornament the backs of the cards."

With the context provided by Mulholland, studying the back designs of throwout cards can offer important details about their provenance.


You can learn more about common card backs in the following posts:


Want Throwing Cards in Your Inbox? - These posts, along with their wonderful illustrations, can be delivered to you via email, free.   Just enter an email address into the box located at the bottom of the page.   Note: if you're looking at the mobile version of our page, you'll need to go to the web version to find the gadget.