This post concerns the not-so-well-known, but still famous 19th century New York magician and magic shop owner Otto Maurer and his son. There is not a lot of biographic material on Maurer, but thanks to the tireless research of historian Tom Klem, we know quite a bit more about this father and son team. And, thanks to some unidentified magic collector who assembled many of the cards in my collection, we also know that Maurer’s son had a scaling card, it exists (below), and is offered here for your pleasure. 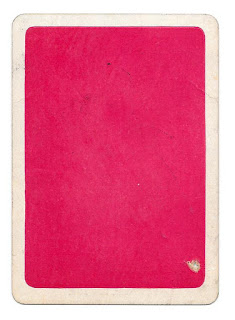 Much of Maurer’s life is detailed in Klem’s article “Otto Maurer’s Magical Bazaar,” in The Yankee Magic Collector, Vol. 17, 2016, published by the New England Magic Collectors’ Association. Mr. Klem has graciously allowed me to draw from his article for the purposes of this post. Thanks.

Maurer was born Oct. 28, 1846, in the village of Gemeisheim, Germany. When only 16 years old he immigrated to the United States and arrived in New York City where he quickly became part of a burgeoning German community located in the Bowery.  Census records have him employed as a tinsmith and in that capacity, he apparently also sometimes repaired the apparatus of local magicians. In 1872, he opened a magic shop in the basement of a five-story tenement building at 321 Bowery Street near Second Street.

As Klem points out, in the nineteenth century, the Bowery had a thriving theatrical district with many first- and second-class theaters, dime museums and other sources of entertainment. There were also great restaurants and shops and it was a popular destination for those seeking entertainment. John Henry Anderson, The Wizard of the North, appeared at the Astor Place Opera House in 1851. Among Maurer’s regular customers were Imro Fox, Horace Goldin, Arnold De Biere, Frank Ducrot, Alexander Herrmann, Harry Houdini, Howard Thurston and many others.


Apparently, Maurer’s shop was also the first place that the back-hand palm was shown to magicians. According to the stories, Maurer was shown the move of effortlessly shifting a playing card from the tips of the fingers to the back of the hand by a traveling Mexican gambler. This would have been around 1887. Maurer taught the sleight to other performers including Houdini who was performing at the Globe Dime Museum in 1894, almost directly across the street from Maurer’s shop.

Within a short time, Houdini had added this sleight to his repertoire, proclaimed himself the “King of Cards” and had a lithograph printed to publicize the fact. 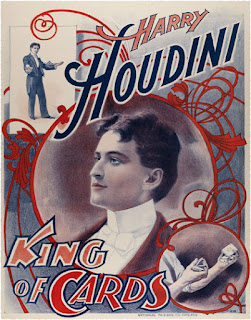 T. Nelson Downs also learned the sleight as did Thurston, who utilized it in his very successful card manipulations.
Maurer married Emma Brichard in 1877, and they had three children, one of whom was Otto Jr., who played piano during his father’s performances (mostly in parlors) and who later went go on to operate the shop after his father’s death as well as performing musically and magically.

In the late 1890s, the magic magazine Mahatma started reporting on Maurer’s declining health due to cancer. After many hospital visits, Maurer passed away May 15, 1900. The New York Times ran an extensive obituary which read;

“King of Magic” Dead
A Master of Legerdemain on the Bowery Passes Away
The Bowery “King of Magic” is dead and the “Magical Bazaar” at 321, which for twenty-eight years has been a storehouse of implements for mystifying, has at last been visited by the mysterious hand of death. “Professor” Otto Maurer, one of the quaintest characters of the thoroughfare, succumbed to cancer last Tuesday in the Post-Graduate Hospital.
He came from Germany when a young man and established the shop, bringing with him many of his inventions for tricks. Incidentally he gave lessons in the art of mystifying the public.
As the years went on he accumulated a fortune and married. He could not mystify his better half, however, and they separated. Their son remained with his father, who instructed him in the tricks he know so much about.
The old “King of Magic” knew what good living was and his money finally disappeared. He died a comparatively poor man. The funeral will be held to-day, and many of the “professors” old friends on the Bowery will follow the body to the grave.
It is more likely that rather than living the high life, Maurer’s monetary resources were depleted unsuccessfully battling cancer. The New York Herald also covered the story with the headline, “Wizard of the Bowery is Dead.” Houdini was reportedly the last person to see Maurer alive. 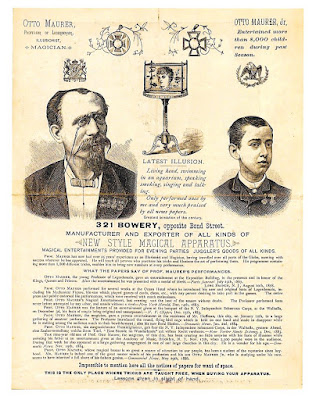 After Maurer’s death, his son, Otto Jr., continued to operate the business out of the address at 321, but eventually moved the shop to 105 E. 14th Street. It only operated there for a short time and then the shop and its contents were absorbed into the New York Magical Company on Broadway in Brooklyn.

The scaling card featured here bears the 105 East 14th Street address, probably written in Otto Jr.’s hand. It seems likely he continued to use the original cards after his father's death but then manually added the new address. According to Houdini, writing in his Conjurors Monthly, Maurer Jr. ended up working in the musical department of a store in Newark, NJ. As late as 1920, the Census showed him living with his mother. It is uncertain when he passed away.