David Kwong - The Enigmatist at the High Line Hotel 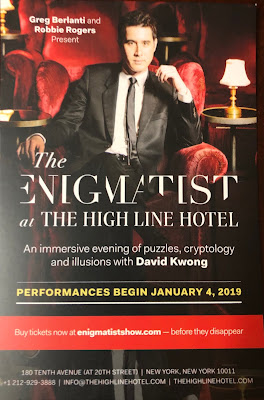 Sometimes you come across a magic performance that is so very unusual that it reminds you of the vitality and variety of the art.  After all, under the heading of "magician," one can see illusionists, close-up performers, mentalists, escape artists, buskers, street magicians, pickpockets and parlor prestidigitators. But David Kwong, now performing as The Enigmatist at New York's High Line Hotel, defies all categorization.  He has crafted a performance unlike any I've encountered: Kwong combines magic with his affinity for puzzles, ciphers, games, history and wordplay.  The result is a positively enchanting narrative.  Make no mistake: those familiar with our craft will recognize certain magic and mentalism techniques that underlie some of the things that Kwong offers.  But these techniques are buried deep, and Kwong is such an eminently likable, engaging and talented artist that, well, you simply won't care.  As for non-magic folk, they are unlikely to discern the line between magic and other skills, a line which Kwong so deftly crosses and ultimately blurs.


David Kwong is uniquely qualified to bring this particular performance to the stage.   As noted on his website: 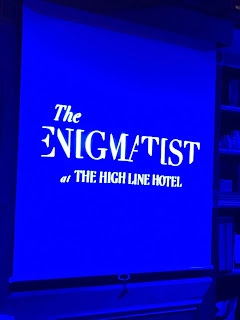 With his expertise in enigmas and magic, David Kwong delights and challenges audiences around the world with his intellectual brand of “puzzles and prestidigitation.”

Kwong recently produced Deception, ABC's show about a magician who joins the FBI. He's also the puzzle and secret code consultant for the hit NBC show Blindspot. He was the head magic consultant on the 2013 worldwide hit film Now You See Me. Other films Kwong and his Misdirectors Guild have worked on include The Imitation Game, Ant-Man, Mission Impossible: Rogue Nation, and The Magnificent 7.
Kwong was a featured speaker at TED 2014. His talk on how human beings are “wired to solve” involved hiding secret messages in the New York Times crossword puzzle. Kwong’s book Spellbound: Seven Principles of Illusion to Captivate Audiences and Unlock the Secrets of Success was published by Harper Business in May 2017.

Kwong is a graduate of Harvard University, where he studied the history of magic. 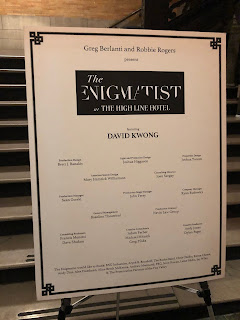 Interestingly, he's also a member of the Misdirector's Guild, together with Dan White, whose captivating show I've discussed elsewhere on the blog.

It's also worth mentioning that Kwong could not have found a better venue for his show.  Not only is it housed in the bedazzling, quirky High Line Hotel, but Kwong has managed to dedicate a remarkable portion of the building to recreate the Riverbank Estate, a location important to the history of cryptography that Kwong weaves into his performance.  The show has interactive elements that I will not elaborate upon here, simply so as not to spoil any portion of this wonderfully entertaining evening. 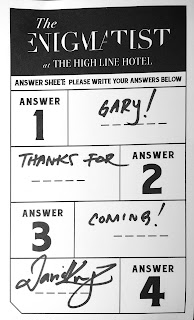 And for ephemera collectors, note the following: the card at the very top of this post is a postcard-sized piece with a blank back.  Kwong's business card, above, bears the logo of the Misdirectors Guild.  And the signed answer sheet, left, is part of the fun of The Enigmatist, upon which I will not expound further....

For everyone else who is anywhere near New York City - go see The Enigmatist.  You will not regret it!