First, my apologies for my long absence from this site. Life has been interesting since my last post and I'll leave it at that. I'm updating my May 16, 2017 post on the Dean of Cincinnati magicians, George W. Stock. Hence, the cute title.

When I wrote of Stock and featured two of his wonderful scaling cards, one which showed him shaking hands with Thurston after entertaining the master magician by performing his full evening show at the Lyric Theater in the city, I should have mentioned that his father, John Stock, was also a touring magician. 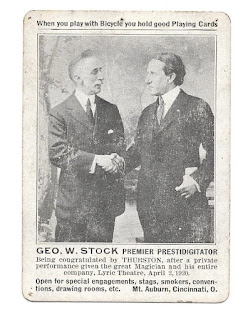 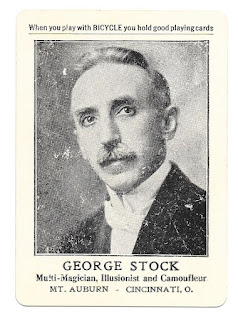 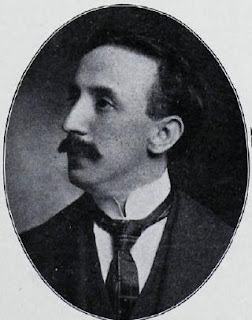 He didn't have a scaling card as they weren't popular or used during his lifetime, but here is some information on him. He was born in 1828 in Saxony, Germany. He toured Europe performing magic from 1840 to 1848, a relatively short career there. He emigrated to this country about that time and performed magic in local theaters and concert halls in the eastern U.S. and then moved to Cincinnati where he operated the Lafayette Hall on upper Race Street. His specialties were magic and vent.

On his 83rd birthday he entertained friends and by reports, was as competent and entertaining as he always had been. He passed away in 1911.  Interestingly, he was the first magician to extract a canary bird from an egg with a borrowed ring around its neck. I recall seeing a John Stock broadside in an old magic magazine on Ask Alexander, but couldn't locate it for this post. Perhaps some other reader or one of my Propelled Pasteboard authors can come up with it.

Finally, here is the footstone of George W. Stock who is buried in the Masonic Cemetery in Cincinnati. Cheers! 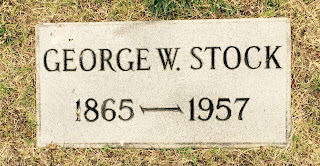