Traveling in Style with Cadillac Willie 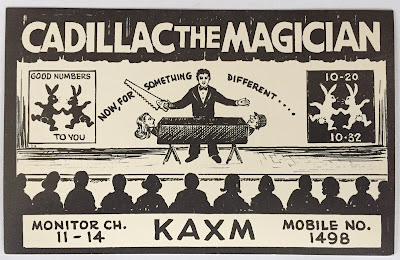 When I first came across this card for Cadillac the Magician, it proved something of a mystery.  First, thorough searching of the Ask Alexander database revealed nothing about this performer, suggesting that, whomever he was, his career had eluded the near-encyclopedic coverage of magicians in the trade press.
The Canadian gentleman who sold this card to me via eBay had met with "Cadillac Willie" and obtained a small supply of these cards which were used as a business card.  So the name "Cadillac Willie" rather than just "Cadillac the Magician" offered a clue.  And some web searching turned up a few sources, most particularly a blog with the fabulous moniker "Coolopolis."  According to that site, which had a nice obituary for this performer, Cadillac Willie Wilkerson got his name from the trademark Cadillacs that he regularly drove.  We learn that Willie hailed from Los Angeles, moved around a bit (spending some time in Detroit), and eventually settling in Westmount in Canada.  His son, a New York area fireman, was engaged to Aretha Franklin, allowing Willie, for a time, to hobnob with celebrities.  One commentator at Coolopolis describes seeing Willie perform at a festival in Montreal, attesting to his skills as a stage pickpocket working without stooges.  One newspaper report suggests that he previously had a career as a heavyweight boxer, but could dance gracefully and frequently worked as an emcee across the U.S.

The Coolopolis blog also relates the following about a different card that Willie supposedly gave out:

One of his business cards had his image on one side and some sort of escort on the other. He explained that if a man's wife caught him with the woman's card, he could flip it over and say, "no honey that's just Cadillac Willie's card."


I don't know if that account is true, but that card would be quite the collectible. 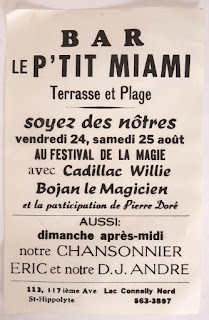 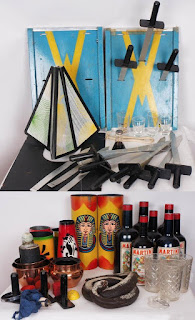 I was able to turn up a closed listing on eBay in which a seller sold off Willie's magic equipment collection.  These well-used props seem somewhat typical for a magician who performed at a variety of nightclub-type venues, including liquor bottles, brightly colored tubes, and a mean-looking rubber snake.   (Among the effects pictured is a UF Grant effect called "Moxahalla" based on the rice bowls principles.)  The lot sold for less than $100.
The content of the postcard-sized keepsake seen above also captured my interest.  Having held an amateur radio operator's license many years ago, and recalling the CB radio craze of the 1970s, the card put me in mind of an item that ham radio operators call a QSL card.   QSL cards were used by radio operators to confirm by mail contacts made by radio -- ham radio operators treasured their collections of cards obtained from fellow radio enthusiasts from around the world.   And early mobile telephony tended to blend with radio operation, so that mobile phone owners would "monitor" certain channels.  So, it would seem that Cadillac Willie, given his fondness for car travel, also used some type of radio equipment to stay in touch when on the road.   And, in terms of combining the QSL card with a business card, a bit of searching on the web revealed that he would not have been the only magician to have done so.  Several examples follow.