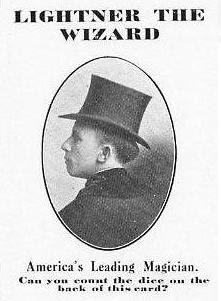 This throwout card for Senator Joe Lightner (1884-1946) has everything a person could want in a throwing card. First, behold the intriguing stage moniker -- Lightner, reminiscent of lightning, conjuring up powerful supernatural images. Then, look to the bold, unsupportable claim to the title "America's leading magician," an excellent piece of showmanship. Next, consider the dramatic portrait -- the conjurer's profile, with a top hat perched at a jaunty angle, simply exudes mystery. Finally, the card contains some real magic -- the face of the card entreats the holder to count the dice on its back. (A standard Deland back design makes this a puzzling endeavor.)

Lightner first performed as "Lightner the Wizard" in 1906. performing in Chautauqua.  He was close friends with Dr. A.M. Wilson, and after the good doctor's death, he joined a group of investors who bought The Sphinx magazine, becoming a shareholder and member of the Board of Directors.

While I was running the throwingcard.com web site, Tom Ewing kindly supplied the following report about Lightner from the October 1943 issue of The Sphinx: 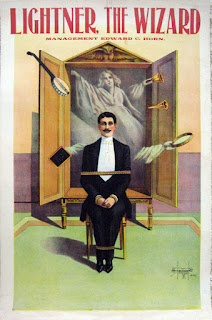 The Hon. Jos. G. Lightner, a member of the Missouri Senate, and leading citizen of his home town of Odessa, Missouri, is as proud of once having been a magician as he is of any of the various high elective public offices he has held.


Joe Lightner had his own show of magic for a number of years and as he was a good magician, it was a good show. It was during this period of his life that he first became a close friend of the late Dr. Wilson. During the latter years of the Doctor's editorship of The Sphinx, Joe aided him in innumerable ways. His devotion to Dr. Wilson and The Sphinx prompted him to become one of the first stockholders of the present corporation. At one period, Joe was also associated   with the Seven Circles magazine. An early member of the S.A.M., Lightner regularly came to New York for the annual banquets. He has also attended many conventions of magicians. Joe likes magic to be fast, colorful and it must be entertaining. Although he has little time for his own magic today, he always seems to be able1 to make time to go to see the performance of some other magician. His love of watching magic is so great that he will travel great distances to see a performance.


Joe Lightner in his quiet way is awfully good company and knows magic and magicians of today and yesterday. 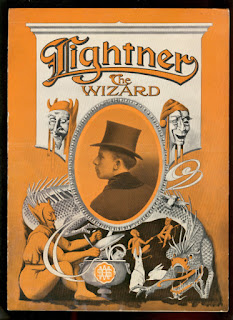 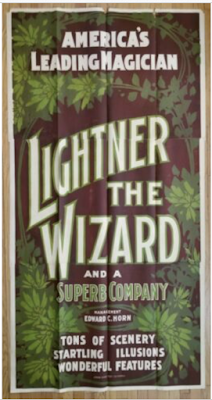 He had a storied career in and out of magic, becoming president of a group called the International Magic Circle and regularly reporting on the Seven Circles Conclave.  His wife- named Marvel - also performed in vaudeville with comedian Gallagher Shean.   Collectors might be interested to learn that he inherited many artifacts from Doc Wilson, including the very first pack of Deland's Dollar Deck, autographed by Deland for Wilson.


Lightner died of a heart attack in 1946 at age 62.  Upon his death, The Sphinx described him as "a brilliant man of noble tendencies."