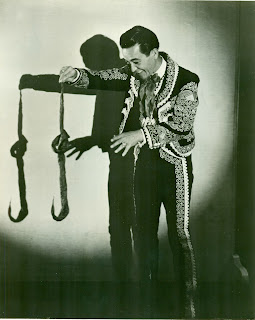 Born on April 8, 1896 in El Paso, Texas, Abel Maldondo lived in the United States for eight years before moving to Mexico City in 1904 with his parents, Ignacio and Izabel. According to Maldo, his older brother, Benjamin taught him what he learned from magician Jesus Lopez. At that time, Lopez was performing under the name “El Brujo Monderno or The Modern Sorcerer (As an aside, Lopez changed his name later to Alonzo Martini and performed in the Los Angeles area creating a show that included mind reading, magic, and illusions). While in New Mexico, young Abel was instructed by Lopez and learned the finer parts of magic that he would use for the rest of his life.
With the knowledge he had learned from Lopez and with a handful of performances under his belt, Abel returned to the United States in 1911 and toured the southwestern states of Texas, New Mexico, and Arizona using the name Abel McDonald. He presented a show with varied card tricks, Shadowgraphy, audience participation. His featured effect was “The Burial Alive”. There’s no telling when Abel met Floyd Thayer (1877-1959), but their friendship continued throughout their lives. Floyd included a few of Maldo’s ideas and effects in the Thayer catalog.
Maldo continued performing adding effects to his show besides working with coins, cards, cigarettes. In 1935, he put out a booklet titled, Get It? A Book of Tricks and he put other effects and tricks under the name “McDonald”. It was during that time Abel had stepped into the guise of “Señor Maldo” dressed like a Mariachi in full colorful wardrobe and a wide-brimmed hat from Mexico called a sombrero. His magic show was filled with assorted skilled manipulations, paper-cutting effects, and he would include a special feature. Maldo would present his version of the Substitution Trunk and the audience thoroughly enjoyed it for each performance. At the 1936 Pacific Coast Association of Magicians Convention in San Jose, California he received the Houdini Trophy, presented to him by Mrs. Beatrice Houdini for his performance of the substitution trunk trick.

He continued to perform throughout California at magic conventions and personal appearances. Maldo’s Six Card Repeat was different enough that Harland Tarbell asked to have it included in his course of magic. It was said by a number of those who saw Maldo present the effect, he performed his “Six Card Repeat” effect in a way of counting the cards and merely throwing the cards from on hand to the other. His way of flourishing nonchalantly and then tossing the cards gave the audience even more reason to be astounded by his presentation. And the magicians were complete impressed in seeing a personal style added to the effect they had seen so many times before.

In the 1930’s, Maldo and his wife lived and worked locally in the Santa Barbara. During World War Two, in 1942 Maldo registered for the draft and then was one of the many magicians would volunteer their services on the USO tours. Whether Maldo had only time to show the troops a few card tricks or other magic effects, his audiences were enthralled having a time away from their duties. In a portion of an article written reviewing one of many of Maldo’s tours, the one that took him to the Mediterranean was one to be repeated. It said the following, “…Maldo, the Mexican Magician, relied on more than a deck of cards to beguile GI audiences during his ten months tour of the Mediterranean for USO-Camp Shows. His egg trick was a soldier favorite and a GI never failed to eat the all too rare egg after the stunt. ‘Eggs are just like nuggets of gold over there’, said Maldo. ‘I always managed, through very good fortune, to have three or four dozen with me, carrying them in a special container. I did the trick, which involves bouncing a piece of paper on a fan until it gradually expands to take the form of an egg. You should have heard the 'Ohs' and 'Ahs' when they saw a fresh egg! Invariably some soldier would eat the egg raw . . . that's how hungry they were for one.’ Maldo is a one of a kind…”.

In 1951, Maldo along with the clubs and organization performances, he was played fair shows and fiestas. Also in 1951, Abel and his wife could be found at their Mexican restaurant Maldo’s El Charro on Santa Barbara Street. In 1952, he was included in the list of performers at the Abbott's 17th Get Together in full colorful Mexican costume. Maldo was involved with the magic clubs in Santa Barbara. In 1952, he served as President for the Pacific Coast Association of Magicians. That particular year the P.C.A.M. and Society of American Magicians had their joint magic convention in Santa Barbara. Maldo would freely give his time to be ‘a man of many hats’ for that convention.


During the early 1950’s, Maldo accepted a particularly unique tour. He traveled with a seventeen-member troupe around the Midwest appearing at state fairs and small theaters with Miss Sally Rand famous fan dancer. Their tour schedule took them across Oklahoma, Texas, and then Washington. Maldo was one Milt Larsen’s choices to perform in his new production of “It’s Magic”. He was also one of the chosen magicians to appear on Art Baker’s “You Asked For It” television show. Señor Maldo presented his substitution Trunk.

Maldo had made a good living with magic and his life in Santa Barbara among his friends and family; it was always satisfying. In the later part of 1959, he had found that after a doctor’s examination he needed an operation to remove a small lump on his neck. The operation went as planned, but the diagnoses wasn’t good. Even though all that he went through during that time, he continued to perform shows and never allowed what he knew was inevitable to slow him down. Three months after his operation, Abel Maldonado passed away on December 8, 1959.
Posted by Gary Frank at 5:02 PM